Japanese railway companies are known worldwide for their punctuality. However, this doesn’t prevent mishaps from happening once in a while. Considering that Japan is also notorious for overworking and in-office pressure, individuals driven to suicide are unfortunately a common cause for disruption of train services. Especially after vacation breaks, this phenomenon is intensified. For example, people are said to have a unique type of disease in the first week of May, called 五月病 (gogatsubyou or May-sickness).  Although it is meant to be a joke expressing how hard it is to return to school or work after the 1-week holiday of Golden week, the frequency of 自身事故（jishin-jiko or human accident）because of people who fell in the tracks, redoubles on the following days. Once, I witnessed 3 different 自身事故 at stations along different train lines all around central Tokyo. I don’t even dare to consider about the situation in the rest of the country, because prefectures far from the big city centers tend to have higher suicide rates, due to complex reasons (source).

On the other hand, some times the train service is disrupted or ダイヤが遅れています-which google happily translates as “The diamond is behind schedule” – due to non-saddening reasons like heavy rain or an unwell feeling of a driver. While checking the official announcement on twitter, I expected replies expressing complaints, discomfort or discomfort. That guess couldn’t be further from the truth. “Even if the train is late it’s OK, safety first!”, “Be careful during this heat!”. Most of the replies contained heart warming wishes for the well-being of the driver and the rest of the employees, while highlighting the gratitude everyone should show to those working hard to make our lives convenient. And that’s what we should keep in mind. Human beings are working towards preserving a safe and convenient environment for all of us, the least we can do to pay it back is to be considerate of others, instead of contributing unhelpful criticism. 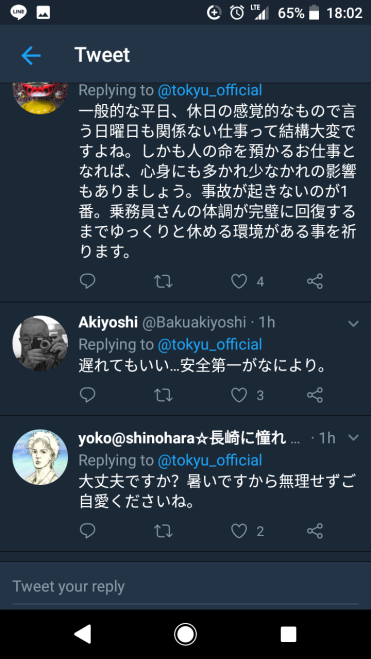